Where Every Adventure Is A Curious Adventure 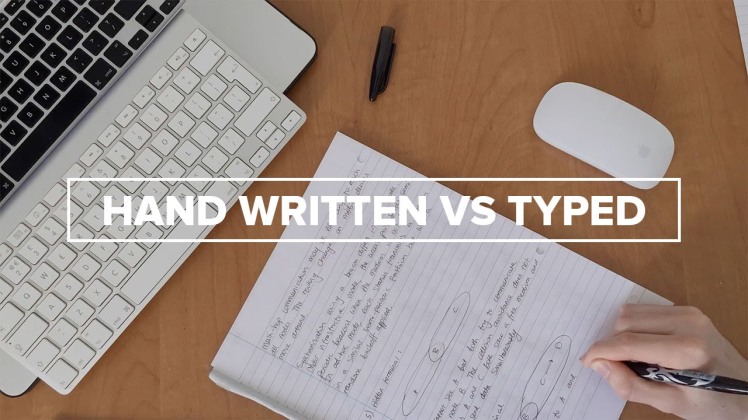 When the professor asks in class, “Has everyone got this down [information from the powerpoint],” they tend to look at me for a reference to know whether or not they can move on.  The reason being I am usually, if not the only one, handwriting my notes in class.

Handwriting notes has been a habit of mine since I started taking notes pre-college days, where we were not allowed technology in class.  My friends and I loved touching the back page of the notes and feel the indents of the words that we have written down (I know, I’m pretty weird).  Running my hands down the back page of the paper made me feel satisfied with the effort I had put in.  It is a sensation I still love.

Entering college, I had the freedom to choose whether or not to handwrite or type my notes, but the familiarity and consistency of handwritten notes stuck with me.  I was a mathematics major my first semester so taking handwritten notes was easier to follow along.  When I made my switch to communication major though, that was when the technological split of note taking happened.  There was me with my notebook and pens and the others had their Mac laptops charged up and ready to go for the next hour and twenty minutes.  Honestly, it felt weird being in the minority for handwriting notes, but I have gotten used to it now.

One of my classes this semester has A LOT of materials to read and notes in class, though I fully enjoy what I am learning.  Luckily, the professor always post the study guide for each exam in the beginning of a new section so we can fill it out as we go.  I do my usual handwritten notes and then on a later time, I fill out the study guide on my computer.  This system has worked pretty well so far, academically and personally.

In the past, I had read articles on typed and handwritten notes.  The main study various articles refer to was by Mueller and Oppenheimer, in which they concluded people remembered better when they had taken handwritten notes compared to typed notes.  Other major findings were that typing notes did not allow the typist to actually process what they are typing; they are just typing word for word what the lecturer had said.  People who wrote out their notes needed to process what they were writing down and select which information was the most important to write down.  After all, people did not have the time and speed to write down every single word of the speaker.

I was tired and lazy one day and happened to have my laptop with me for this specific class.  I decided to try typing my notes out for an unspecified amount of lectures and see if my findings were aligned to Mueller and Oppenheimer’s.

There were several observations I made throughout my experimental period:

So yes, Mueller and Oppenheimer’s findings were on point compared to mine.  I wrote my notes for the class this week and there really was a difference when comprehending what I was writing down compared to typing it out.  As pointed out by the researchers, people who were writing are unable to jot down every piece of information so they had to select which information was worth writing down.  I knew I had been doing that for a while, but the contrast effect between typing my notes for several lectures and then writing my notes made it more obvious.

By not having my laptop, I was more inclined to pay attention and write down any other information that was not posted on the powerpoint.  I was better able to recall what happened in the lecture when I looked back on my notes.

It comes to no surprise then that I am still going to stick with my handwritten notes.  For some classes, it would be a better option to handwrite the notes, like one of the STEM courses, where there are drawings and calculations that need to be done.  If typing works for you, by all means, keep doing it.  I encourage you though to try handwriting your notes one day, because as my life motto goes: you don’t know unless you try.

One thought on “Handwriting vs Typing: Verdict”